SCSA and its president Vlado Franjević were mediator of 5th Global Visual Culture Symposium and 9th United Designs poster exhibition in Liechtenstein National Museum. Symposium was hold on the September 13th, 2017 and duration of the exhibition is from September 13th until November 12th, 2017. 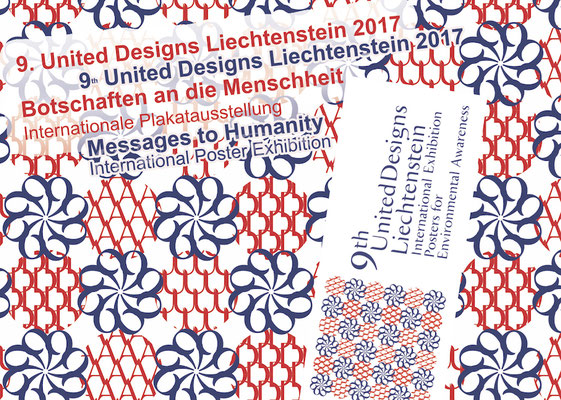 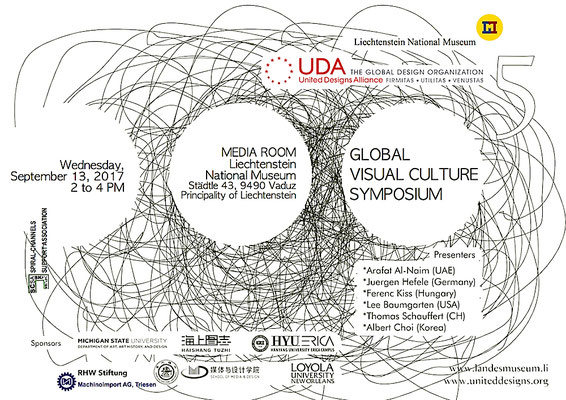 This possibility is based on Vlado Franjević's experiences in the field of global United Designs Alliance (UDA) network and in personal contact to its leaders: managing director and professor at the Hanyang University in Seoul Albert Inyoung Choi, director and dean at the College for art and design of American University in Dubai, professor Arafat Al-Naim, one of international most known graphic designer from India and publisher of Pool magazine Sudhir Sharma, and few others UDA directors.

On other site, Vlado is since 2003 a part time employee in Liechtenstein National Museum. He's lucky about that Museum's director prof. dr. Rainer Vollkommer is a man with open ears and heart... Therefore was possible to bring this symposium and UD exhibition to Liechtenstein.

Friends and participated artists from S.Korea are coming on September 11th. They staid in this nice house in Vaduz. A day after we had first press conference in Liechtenstein National Museum and after that we were invited first to visit the studio of one of the most known and international prize winning graphic designers in Liechtenstein, Leone Ming, and on the evening sponsor of our exhibition invited us to dinner in Paradiseck, in Schaan.

We were very much glad to see next day amazing reports about our symposium and exhibition in both Liechtensteins daily newspapers. We are so much thankful for this kind of support! On the beginning of afternoon on Sept., 13th we were cordially invited from the Liechtenstein Marketing to an Appero in its main public office. Thanks so much to this organization and Martina Hoch for her time btw. most friendly kind of presentation of Liechtenstein to our guests. 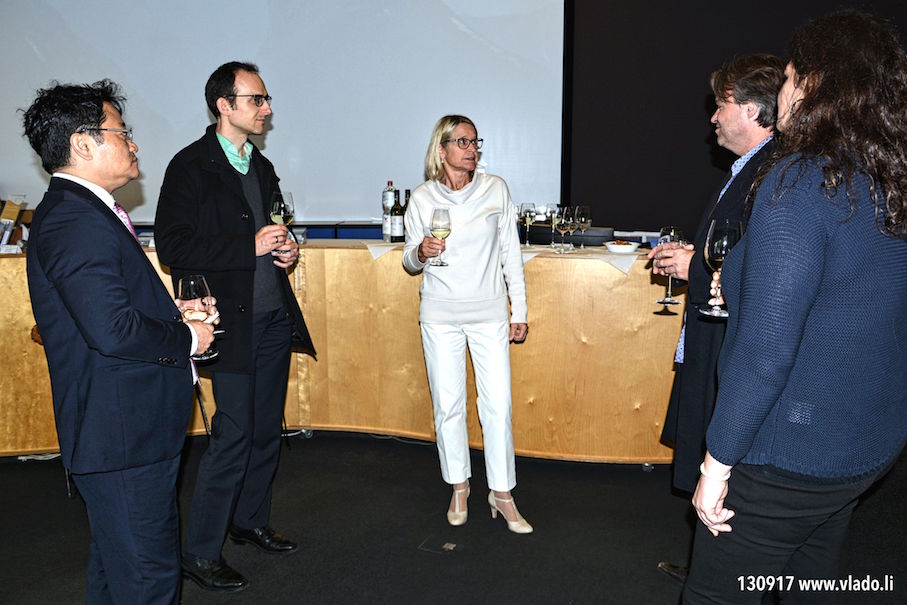 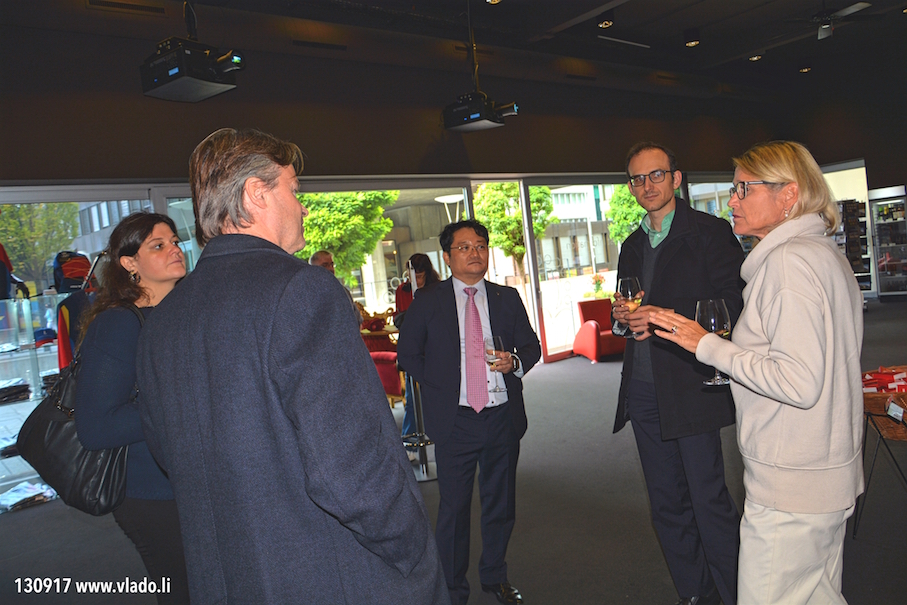 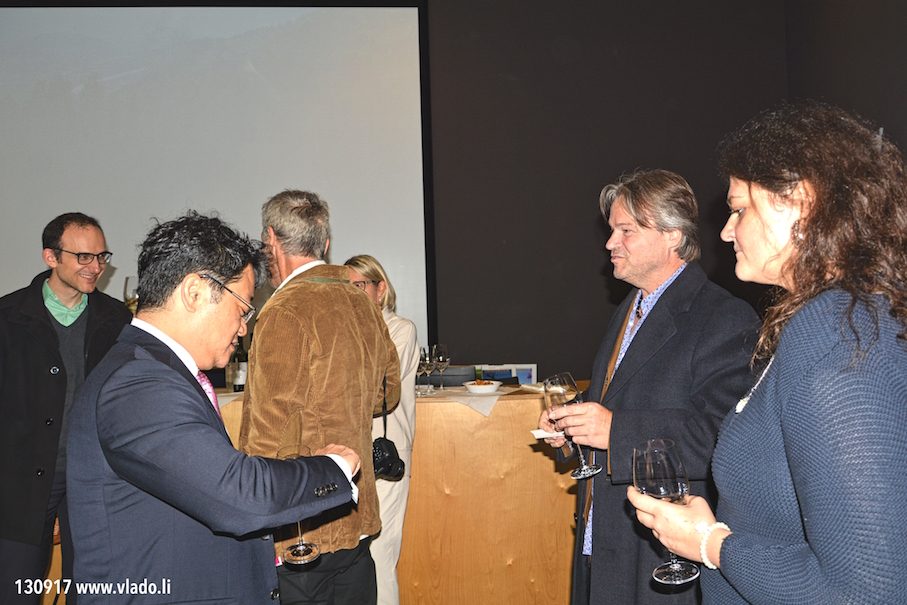 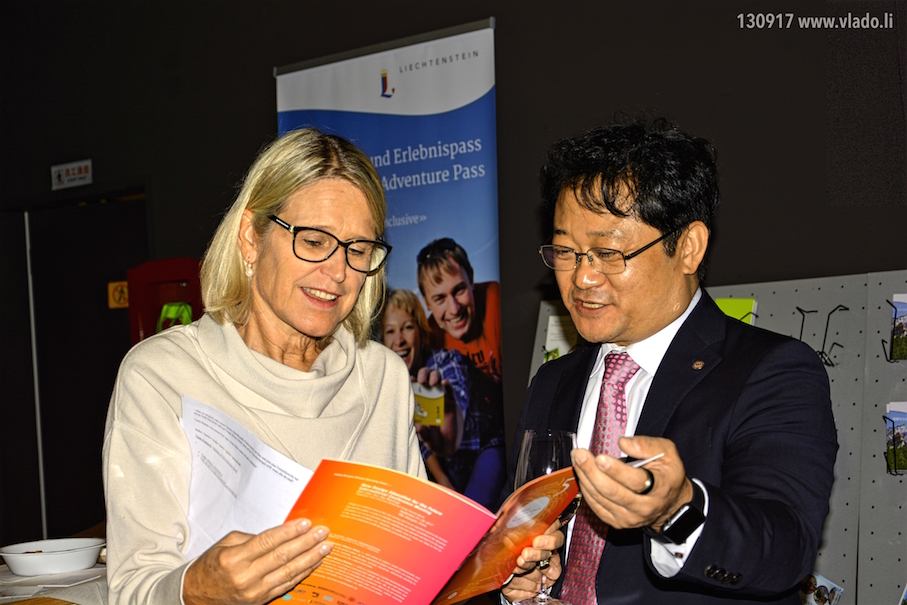 We started with our symposium at 2PM as planed. Even it was the middle of the week and time which is really not the best for to organize any event, we were there app. 30 interested persons which is for a so small place a good result! Btw. we had people here drawing their cars from around two hours Switzerland or five hours from Austria just because they wanted meet or support us! Great feeling. We all from SCSA, UDA and Liechtenstein National Museum are very much thankful!

Here you find now on one please videos with our speakers. Hope you'll like theirs abstracts! 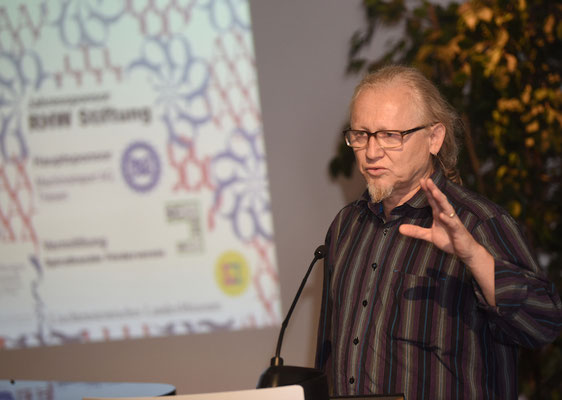 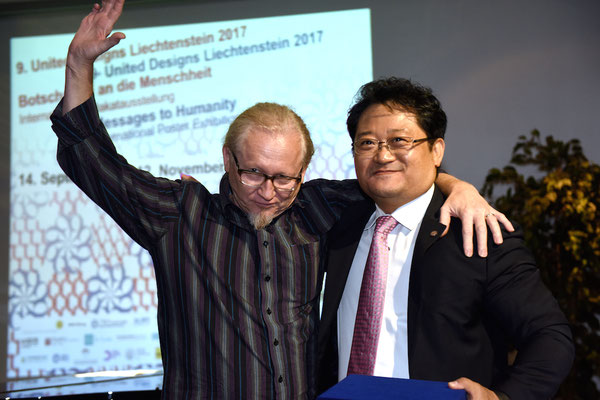 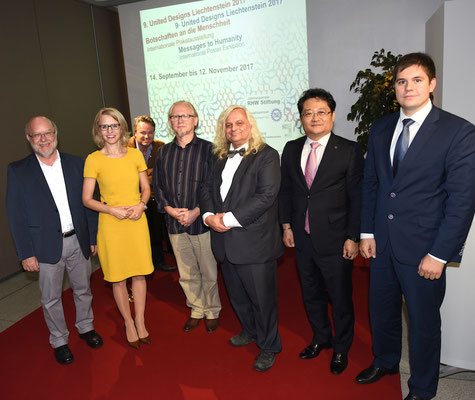 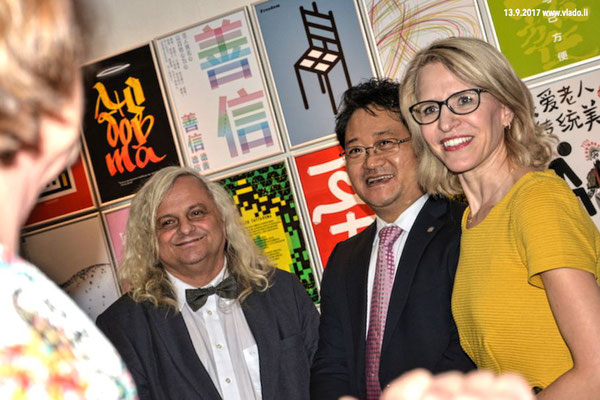 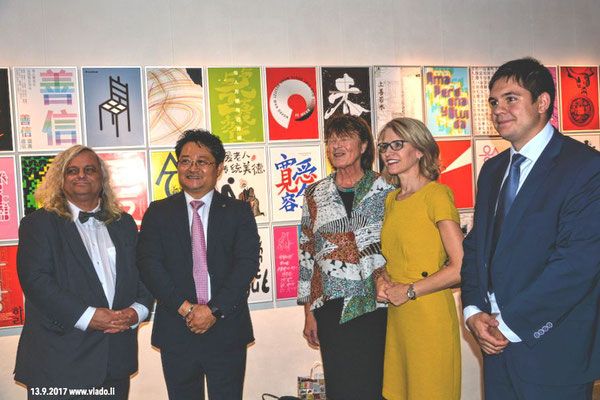 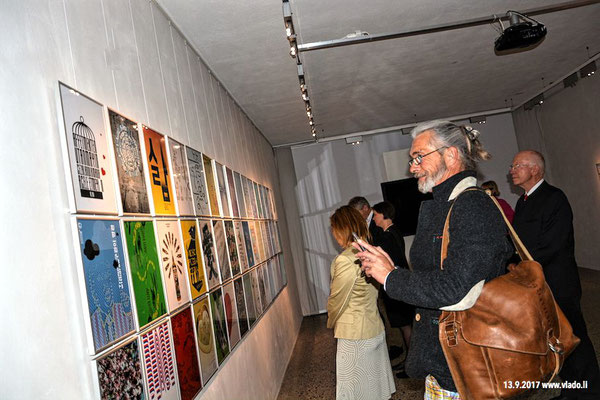 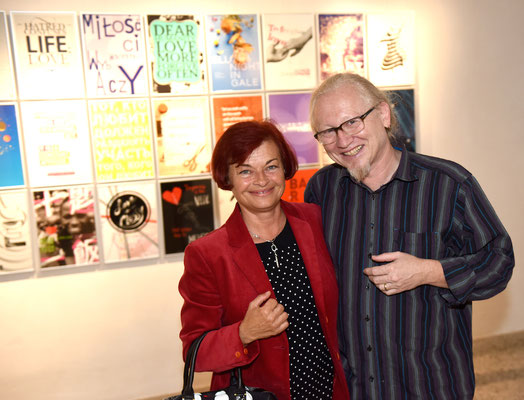 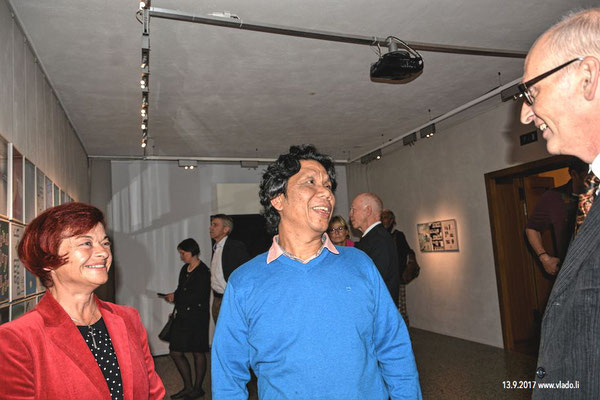 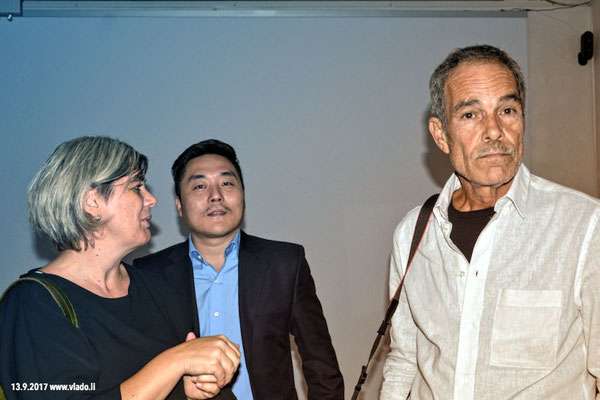 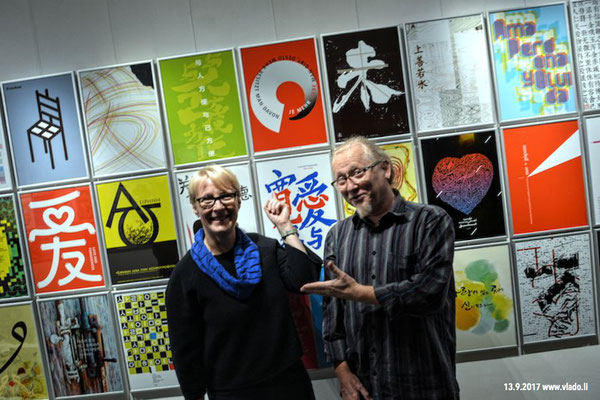 It was a really very nice opening ceremony.  We know no one who participated on both events on the September 13th, 2017, who didn't give us just and only compliments for our good job.

Short after the end of the official opening ceremony we all got to listen a wonderful gift in the form of mini classic concert of great Russian piano player Tatjana Worm-Sawosskaja. That was really nice surprise! 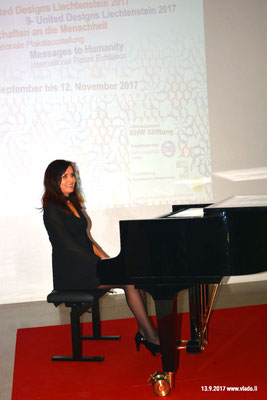 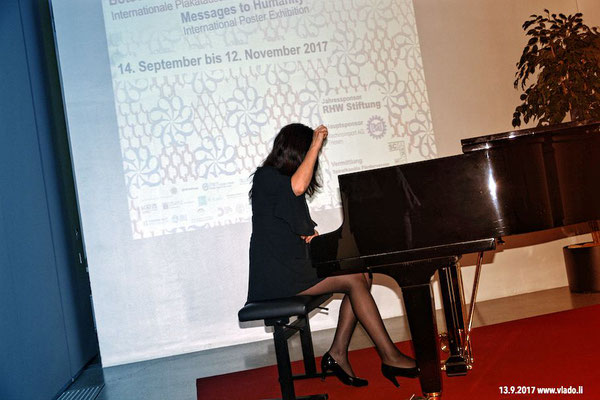 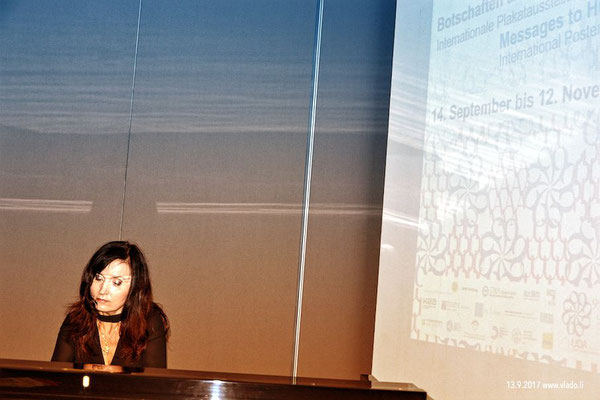 There in the alps friends had one more nice moment - they met the former ambassador of Principality of Liechtenstein in United Nations and in the USA, Miss Claudia Fritsche. She was very nice to stay with the UDA artists and make few photos for a nice memory! We're very much thankful!

On this day, on September 14th, 2017 around the midday, the rain started to be more present and therefore Vlado didn't get chance to show to his friends more of Liechtenstein!

Lunch time in the Hotel Taucher closed to Werdenberger little lake, on other side of river Rhine which is natural border to Switzerland. After that, moving to Sargans. From there Albert and Roy travailed with a train to Zurich. End of the great moments when friends from different parts of the world come to, and meet in the Principality Liechtenstein, and turn back to their home countries with full hearts of positivities!

Great to know also one Croatia info-media in Switzerland, as also many friends and followers on social media platforms, were ready to support promotion of our events. We are very much thankful.

Our exhibition in Liechtenstein National Museum visited also two very interested and interesting art and culture internationals  workers. Here we show you interviews made with them. Thanks a lot!

On 3rd October 2017 Erika Kralj promoted with following interview Vlado and his SPIRAL-CHANNELS project, and Vlado promoted with his interview also exhibition in Liechtenstein National Museum, United Designs Alliance, and more... Erika's radio station is based in her homeland Slovenia. She and Vlado met for very first time in the frame of the realization of 7th Spiral-Channels project issue.  Erika was the first who worked on the Spiral-Channels Hymn!

And then, there were much more reactions and supports based on connections in the frame of our international activities! Erika Kralj made a great interview with Thomas Schauffert, Vlado Franjević was interviewed for an Croatian news media... Prof.dr. Arafat Al-Naim involved Vlado Franjević in a catalogue of College for Art and Design of American University in Emirates (Dubai). 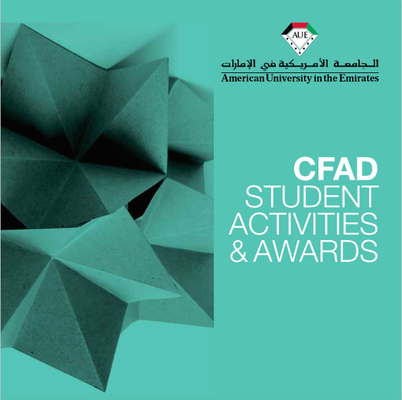 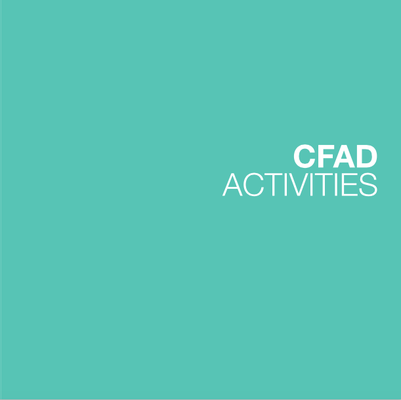 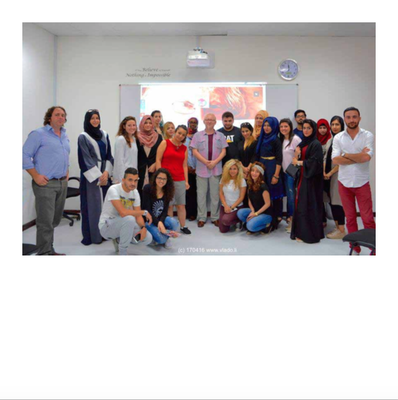 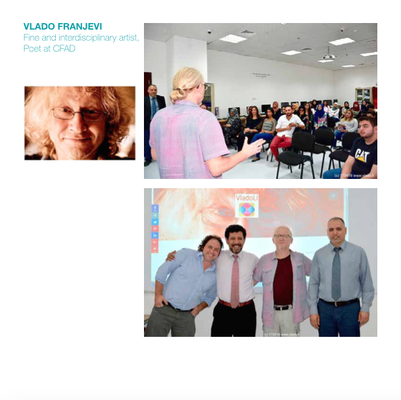 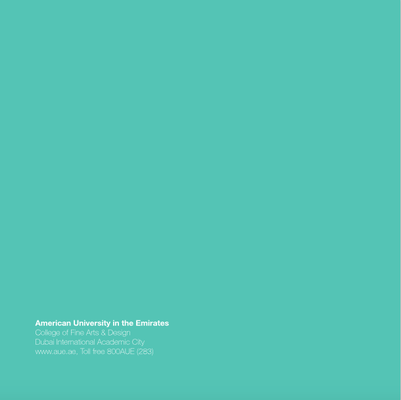 Here copies of pages from the UDA catalogue with the informations about the 5th Global Visual Culture Symposium organized short before the opening of the exhibition 9th United Designs on 13th September 2017.